3rd Sunday of every Month

A   Family Built On Faith

Fr. Henry Atem was born on September 27, 1978, in Cameroon, West Africa. After completing high school, he and his family moved to Georgia. He attended North Georgia College & State University and the University of Georgia where he studied accounting and philosophy.

After joining the Archdiocese of Atlanta in 2003, he attended Mount St. Mary’s Seminary, Emmitsburg, Maryland, where he earned his Masters in Divinity and a Masters of Arts in Theology with a concentration in Systematic Theology. He was ordained to the priesthood on May 31, 2008, by Archbishop Wilton Gregory.

He served as parochial vicar at St. Peter Chanel, Roswell (June 2008 – June 2011), and St. Patrick, Norcross (June 2011 – present). His hobbies are reading, watching TV, and playing soccer and tennis. He was elected to serve as the Vice President of the African Conference of Catholic Clergy and Religious in the United States (ACCCRUS) in August 2009. Father Henry is the pastor of St. George Newnan. 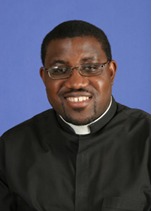